The Illusion of Wealth

The Illusion of Wealth 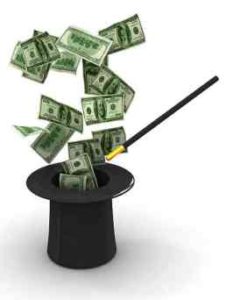 According to Merriam-Webster, illusion is defined as a misleading image presented to the vision or something that deceives or misleads intellectually. When it comes to money, many people are portraying an illusion. They are portraying an image that they have a lot of money and that everything is financially OK with them. You could never tell by the cars they drive, the clothes they wear, or the houses they live in that they are having money trouble. Some people justify these actions by using the old term, “fake it until you make it.” Others say, “you have to look the part.” Unfortunately, faking it and looking the part have gotten many, many people deeper in debt and/or looking for a life line.

A couple of weeks after a recent holiday season, I made a comment to a friend. I do not recall the comment, but her response is as clear as day. She said, “I’m a strong woman! My kids don’t want for anything. I just spent over $1,200 on Christmas gifts for my children.” She said it with so much pride. Again, I do not recall what I said to prompt such a response, but I am sure I was not questioning her ability to provide for her children.  However, I was a bit saddened that she believed that her worth and value were connected with how much she was able to spend on Christmas gifts for her children. Unfortunately, she is not alone. People feel a sense of status based on what they are wearing, driving, or where they live.

A couple of weeks later she made another troubling revelation. She had been taking a car service to work because her car was not working. I asked her what kind of car she drives. She told me it was a BMW. She requested/said she needed a loan for about $2,000 to get it fixed, but she did not think her credit was good enough to get a loan. I told her to apply for the loan and to see what happens, because I cannot approve or deny a loan without an application or it going through the underwriting process. Back to the troubling revelation. She needs $2,000 to fix her car but two to three weeks earlier she paid over $1,200 on Christmas gifts! She was proud that she could buy the gifts but now she was unable to get her car fixed to get back and forth to work. Her priorities were in the wrong order.

I do not know her complete financial situation, and I am not here to berate her. I just want to make the point that there are too many people who want to portray the illusion of wealth while they are struggling to take care of the necessities in their lives. I believe that you can wear nice clothes, drive nice cars, take extravagant vacations, and live in beautiful homes in nice neighborhoods. I also believe that it is important to budget, prioritize, save, and minimize the use of credit. We do not need everything we want, but we can have our wants and our needs if we learn to manage our money and delay some gratification. It is important to not just look the part but also to be the part. All the best!